After an unfortunate series of events around the Acheron Translight Snarl our crew’s trusty Runner-class ship, the “Jolly Jumper” is no more. While narrowly escaping from the D’Jellar anomaly a pilot error resulted in a fatally flawed exit vector from the snarled translight corridor. The lasers barely managed to escape in the ship’s shuttle and had to watch their beloved home break up into a billion pieces.

But as the saying goes, “true lasers are never long without a ship” and an opportunity presented itself, involving a Bleed-wide warrant, a high-level Combine operative, an anti-piracy operation, a staged prison escape and a conveniently-parked Hauler-class starship. 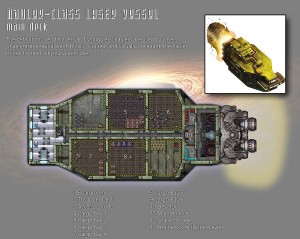 So the laser crew finds itself in the possession of the “Brocken”. A bit worn, the paint scratched in many places, it is still a translight-worthy laser vessel which holds the promise of a better future.

Haulers are the less-than-glamorous, slow and sturdy workhorses of the Bleed nowadays. Designed to carry a maximum of cargo, they provide the surviving worlds of the Bleed with much-needed resources that are not locally available. The image shows the main deck with its six massive cargo bays, the cut-down engine room and the richly furnished “boardroom” which is used to conduct business meetings. The full deck plans for this ship-class are found in the “Accretion Disc” companion for Ashen Stars and were drawn by yours truly with the Cosmographer 3 add-on to CC3.